The present of the department ...

In the field of science the focus of the department is on basic and applied research of physics parameters of semiconductors and dielectric materials, as well as components and nanosensors. The main areas of expertise are noise spectroscopy, local characterization in nanoresolution, measurement of nonlinearities and the design of quality and reliability indicators of components, which allow for non-destructive evaluation of the given technological steps in the process of their manufacture and dielectric spectroscopy. Other fields of research include methods of electromagnetic emission.

The department intensively focuses on the cooperation with our partners in the industry in the present days. We carry out the development of unique devices and systems based on sensors and new algorithms, which allow pushing the boundaries of commonly accessible commercial products to fulfil more specific requirements of the customers.

Czech Technical university of Dr. E. Beneš was forcibly closed in the year 1939. New growth of the university came only after the end of WW II in the year 1945, when the fields of study for civil, mechanical and electrical engineering, as well as chemistry and technology and archicture and construction were reopened. Both department of physics started functioning as well, led by contemporary eminent physicists – Prof. J. Velíšek, Prof. J. Vašíček and Prof. J. Potoček. Year 1945 saw the creation of Department of practical photography on the Czech Technical University, led by Prof. J. Bouček. Both department of physics united under the leadership of Prof. J. Potoček in March 1951.

This form of the university did not last long, though, as it was discontinued in September 1591 by the government, and in its place the Military Academy of Technology of A. Zápotocký, to where Prof. J. Potoček migrated with almost whole of the 2nd department of physics. The original university remained only in the form of University of Civil Engineering, to whose department of geodesy and physics the 1st department of physics was assigned. The department was led by Prof. A. Vašíček, and Prof. R. Koštál since February 1954.

Independent Department of Physics of the Brno University of Technology was created in the year 1961 led by Doc. RNDr. Antonín Syrový, CSc. At the same time departments of physics were created in the Faculty of Mechanical Engineering (led by Doc. RNDr. J. Schwarz, who was until then the head of the joined departments) and Faculty of Civil Engineering (Doc. Ing. J. Binko)

The increasing number of students on the whole BUT led to continual expansion of the individual departments with new members, and so in the year 1972 the Department of Physics contained 19 members. This number was held with small deviations until the year 1991.

Doc. RNDr. Pavel Vašina, CSc., who joined the Faculty of Electrical Engineering from the Faculty of Civil Engineering, was the head of the department since the year 1981. At that time the department provided the education in a basic course of physics as well as Quantum mechanics and Statistical physics for all full-time programmes and correspondence courses under the programmes of Electrical Technology and Microelectronics.

Department of Physics of FE BUT was based since its establishment until the year 1990 on Koněvova Street No.131 (now Vídeňská) in the building of Ferona company. It was then moved in the year 1990 into the BUT campus on Kraví hora; in the same year the leadership of the department went to Doc. RNDr. Marian Štrunc, CSc.

Department of Physics was then in the year 1994 moved into the BUT campus on Technická 8. The department was led by Prof. Ing. Lubomír Grmela, CSc. from the year 2002 until the year 2021, when he was replaced by Ing. Vladimír Holcman, Ph.D. 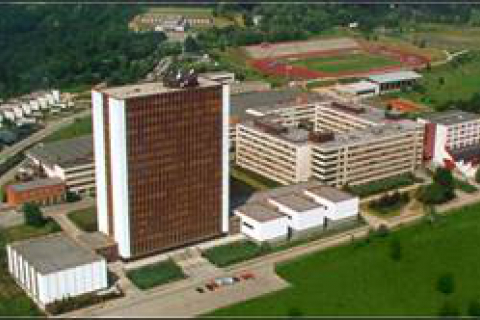 Faculty of Electrical Engineering and Communication
BUT Brno